Nominations are now open for the Supervisor's Community Service Awards. Submit a nomination today for youth and adult leaders, as well as businesses and community groups! https://bit.ly/39BxBtb

Hanover was organized as a Township on April 2, 1850, primarily to provide government closer to home than the county seat in Chicago. Land was divided like a checkerboard into six mile squares called townships, each township being roughly 36 square miles. Hanover's location in the checkerboard is designated as Township 411 North, Range 9 East of the Third Principal Meridian - the farthest west of the old "country Towns" of Cook County.

In 1850 the first federal census of Hanover Township reported a population of 672. Most of these people were from upstate New York and New England. Ten years later, there were 926 residents, but a marked change in composition had occurred. Most were German Protestants from the Kingdom of Hanover in western Germany - hence the Township's name.

The rural government was concerned with collecting the tax, stray animals, control of weeds, maintenance of roads. After spring and fall rains, roads were apt to become long black ditches of mud, so this was quite a chore. The Clerk organized the machinery for elections. Another function, "poor relief" was minimal.

Rural days in Hanover Township ended with the westward spread of the Chicago metropolitan area. It was the rich land that beckoned farmers to this vicinity. That land has now been taken over by subdivisions, shopping centers, and industrial developments. The windmills and creameries are long gone, and only a few white farm houses and barns remain. The Milwaukee Road trains which once hauled milk cans into Chicago are now carrying commuters. But township government lives on, adapting to the changing time, still meeting the needs of the residents. Those needs, of course, have changed dramatically. 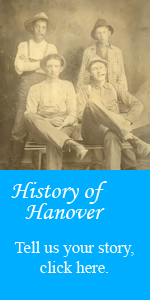 Train station photo from the collections of the Villiage of Bartlett Museums.